We all know going solar is one of the best ways to save money. In fact a typical household could slash up to $890 a year off their power bills, according to Solar Victoria.

What is perhaps less well known, particularly among new solar owners, is how to maximise those solar savings.

The key is to load-shift as much household energy use to the daytime sunlight hours so that it is offset by the free solar power generated from your roof. The more solar power you self-consume, the less electricity you’ll have to buy and the more money you’ll save.

With a hot water heat pump you can maximise your solar self-consumption while simultaneously slashing the costs associated with one of the biggest energy users in your home: heating water, which accounts for a whopping 25% of the average home’s energy usage.

One couple who recognised this is Dave and Jen from Carnegie.

Dave and Jen initially installed a 6kW solar system and found it was routinely producing 30-50% more electricity than they were consuming. So two years ago, they got a Sanden hot water heat pump installed by Solar Flow.

“We were very happy with Tim and the Solar Flow installers,” they said. “They answered all our questions and completed the installation with quality workmanship”.

Dave and Jen set their heat pump to run during daylight hours on the free electricity being generated by their solar panels. Since then their solar power has covered their water heating costs almost entirely, as well as the other day-to-day electricity needs the solar system was already covering.

Together the two systems have delivered significant bill savings and reduced Dave and Jen’s CO2 emissions, with a projected payback period of just six years.

To fully reflect on what has been achieved, we need to go back even further than the installation of Dave and Jen’s solar system and heat pump.

About 12 years ago, Dave and Jen began their sustainability journey for their 1981 brick veneer house, with a plan to improve comfort all year round whilst also minimising their ongoing bills and carbon footprint. They embarked on this in three stages: improving the thermal performance of the house by insulating as much as possible, installing a solar power system that was matched to their needs, and improving the energy efficiency of key appliances within the house (including reducing their use of gas as much as possible).

Dave and Jen started with R6 Earthwool insulation batts that were installed in the ceiling, as well as retrofitting sarking under the roof tiles (to help reduce the heat load into the ceiling cavity during summer days).

This was followed by new R2.5 wall insulation within existing wall cavities plus new R2.5 underfloor insulation (installed under the timber floors), which collectively brought the house to an overall insulation level that actually exceeds many new builds.

Dave and Jen note that “getting the insulation right made a massive difference to the livability of the house, and we could feel it straight away during our first winter. We went from losing most of the heat overnight to enjoying a house with a much more stable temperature all year round. Next step was looking at further improving our energy usage.”

Whilst, in their minds, “insulation was a no brainer to get started”, the next steps involved some careful consideration. After extensive research, they decided on 18 Q-Cells G5-Duo 325W panels coupled with premium Enphase IQ7+ microinverters.

“We went with these more premium solar system components to hopefully provide greater longevity (with a longer warranty period and no single point of failure) and maximise the energy produced for our east-west roof orientation, as well as avoiding any issues with minor shading during early morning and late afternoon,” they explain.

“We also like that with a microinverter system we can easily add to it in future, once newer panels become available, without worrying about system compatibility or needing to replace a central inverter.”

For the first 12 months after installing this solar system (a timeframe which was pre-COVID), they note that they generated more electricity than they consumed.  Then during extensive periods of working from home due to COVID in 2020, their daily usage increased – but this increase was mostly self-consumption of free solar electricity.

With solar power in place (which on many days was producing 30-50% more power than the house consumed), they engaged Solar Flow to install a Sanden hot water heat pump with 300L tank. We chose the Sanden based on superior Coefficient of Performance (COP), broad operating temperature range and warranty.

“There were some confusing discussions online about the efficiency of heat pumps in Melbourne’s colder climate, but we had already moved to reverse-cycle air conditioning for our living spaces and bedrooms, so we were comfortable with the technology.

“We were very happy with Tim and the Solar Flow installers on the day, they answered all our questions and completed the installation with quality workmanship.” 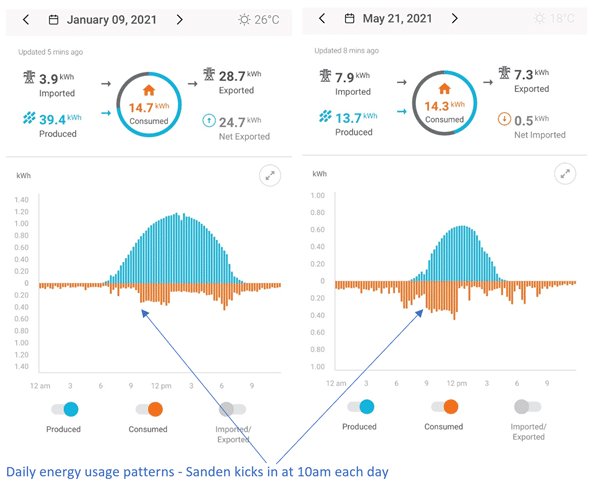 To help maximise the self-consumption of solar power, their Sanden hot water system was set up to begin heating from 10am (with boost up to 10pm) to coincide with their higher solar generation.

Dave noted that “our initial concerns were around the efficiency of the heat pump on very cold days and potentially running out of hot water during cold winter nights – but luckily both of these have proven to be misplaced.

“Over these 2 years, and despite being at home more than ever due to COVID, we’ve never once come close to running out of hot water, and we’ve never even had to think about modifying our families’ behaviour. Since our Sanden was installed in October 2019, I can see from our energy usage that the system has run on pure solar power for the vast majority of days (kicking in just as our solar generation begins to peak) and helped reduce our gas usage by 40% during winter and over 90% in summer.”

Gas usage: Down 90% in summer and 40% in winter following installation of solar + heat pump 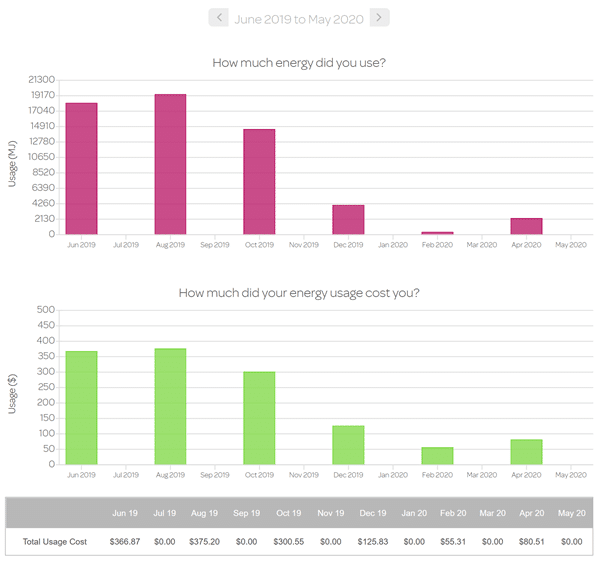 Electricity usage: Down 45% in summer and 15% in winter following installation of solar + heat pump 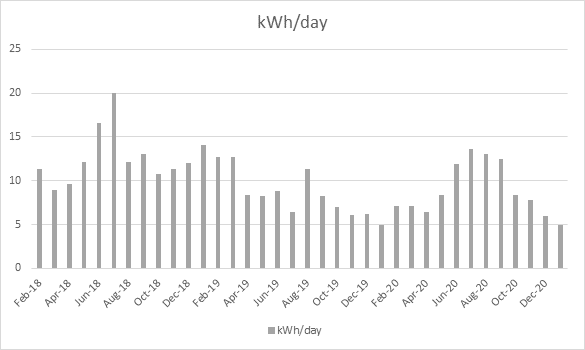 “We’re very happy we went down this path and had complete confidence in Solar Flow for the installation of the Sanden hot water system,” said Dave. “And I was even happier once I looked at improvements in our energy usage!

“Despite spending more time at home due to COVID lockdowns, our gas usage has plummeted and we’ve still produced more electricity overall than our house has consumed – so it has made financial sense, as well as the obvious environmental benefits. Unfortunately, with a growing family we now plan to move house later this year, so someone else will now be able to enjoy these benefits.

“On reflection we’re very happy with all the sustainability elements we’ve completed in this house, and we actually plan to install all of the same elements again (including a new Sanden heat pump with Solar Flow) in our next house.”

Looking to make the switch to renewable energy? Get in touch today for a free, no obligation quote from Solar Flow on 1300 93 14 24 or click on the link.

What is a heat pump and how does it work?

Why choosing the right solar panels, inverters and installation team is so important

How much does a solar battery cost?